The guiding theme of the workshop is to understand climate change as it resides in different social, economic and political settings.

IDP Researchers Mirka Fries, Jakob Nehls, Marie Sophie Keller, and Eklavya Vasudev, together with Siddharth Peter De Souza, post doctoral researcher  from Tilburg University, organized an interdisciplinary workshop on climate justice on the 22nd and 23rd of October 2022. At the workshop, which was divided into five main panels, 23 participants from all over the world presented papers from a variety of disciplinary perspectives. The workshop offered critical insights and scholarly contributions, setting the tone for the group’s overarching goal of hosting a public on-site conference, planned for May, and publishing an interdisciplinary collection of scholarly literature addressing climate justice from a nuanced, comparative perspective.

The main objective of the workshop was to understand and conceptualize climate justice from diverse geographical, disciplinary as well as thematic perspectives. The program consisted of five interlinked panels investigating the role of courts, economic and social rights, gender, technology and data, and agriculture in the context of climate justice. In advance to the virtual workshop, each participant  submitted a short article on topics of their choice within the ambit of the five themes, which served as a basis for fruitful discussions among the panelists.

In order to ensure deep engagement with the content, a peer presentation method (see Institute for Global Law & Policy at Harvard Law School) was used. This proved very successful, as it allowed to combine academic rigor with passionate debates. Each panelist took away constructive feedback and also uncovered hidden insights. In the coming months, the panelists will develop their papers into elaborate scientific articles that will form the core of the planned publication

The panel on courts focused on the questions, how structural transformations in the pursuit of climate justice can be fostered by judicial processes. The panelists discussed current legal issues related to space, time, and urgency in climate litigation. They covered approaches ranging from human rights law to investment law as well as regional best practices from India and Brazil.

The panel on economic and social rights contrasted different understandings of human rights in general and economic, social and cultural rights in particular in the Global North and South. By looking through the lens of concepts like environmental racism or corporate occupation from both regional and global perspectives, the need for a decolonized reading of rights was emphasized.

The gender panel focused on gender and other intersecting social categories and their impact on climate justice. The discussion focused i.a. on how “othering” hinders the struggle for climate justice. As a holistic response, the panelists pointed to Latin American communitarian feminism, which conceives time, space and body as interlinked concepts and therewith serves as a tool to question the individualistic nature of dominant discourses. They further discussed the role of indigenous knowledge and women’s engagement as keys to environmental and climate protection.

The technology panel discussed the role of technology, data policy, and respective regulatory approaches in climate justice. The panelists generally appraised the role of technology and data in creating solutions to climate justice. However, all discussants critically commented on narratives framing the latter as panaceas, as it risks ignoring their role in the manifestation and reinforcement of inequalities.

In the agriculture panel, the discussions turned on the various actors in this field, and analyzed their vulnerability and responsibility in the struggle for climate justice. Special attention was put on the role of the law, its inherent biases and the potentials and pitfalls contained in different legal systems. As transnational agricultural corporations continue to increase their profits also in the face of the climate crisis, the conventional business and human rights approach was critically evaluated.

Next steps and thanks

The discussions revealed obvious and less obvious overlaps and interconnections between all five topics. The focus now is on filling remaining gaps, further developing the papers and coalescing the intersecting projects into one consolidated output. Panelists will continue the virtual discussion before meeting for the follow- up conference on site in Nuremberg from May 8-11, 2023. The organizers thank all participants for their valuable contributions as well as all colleagues and professors who helped organize the workshop. 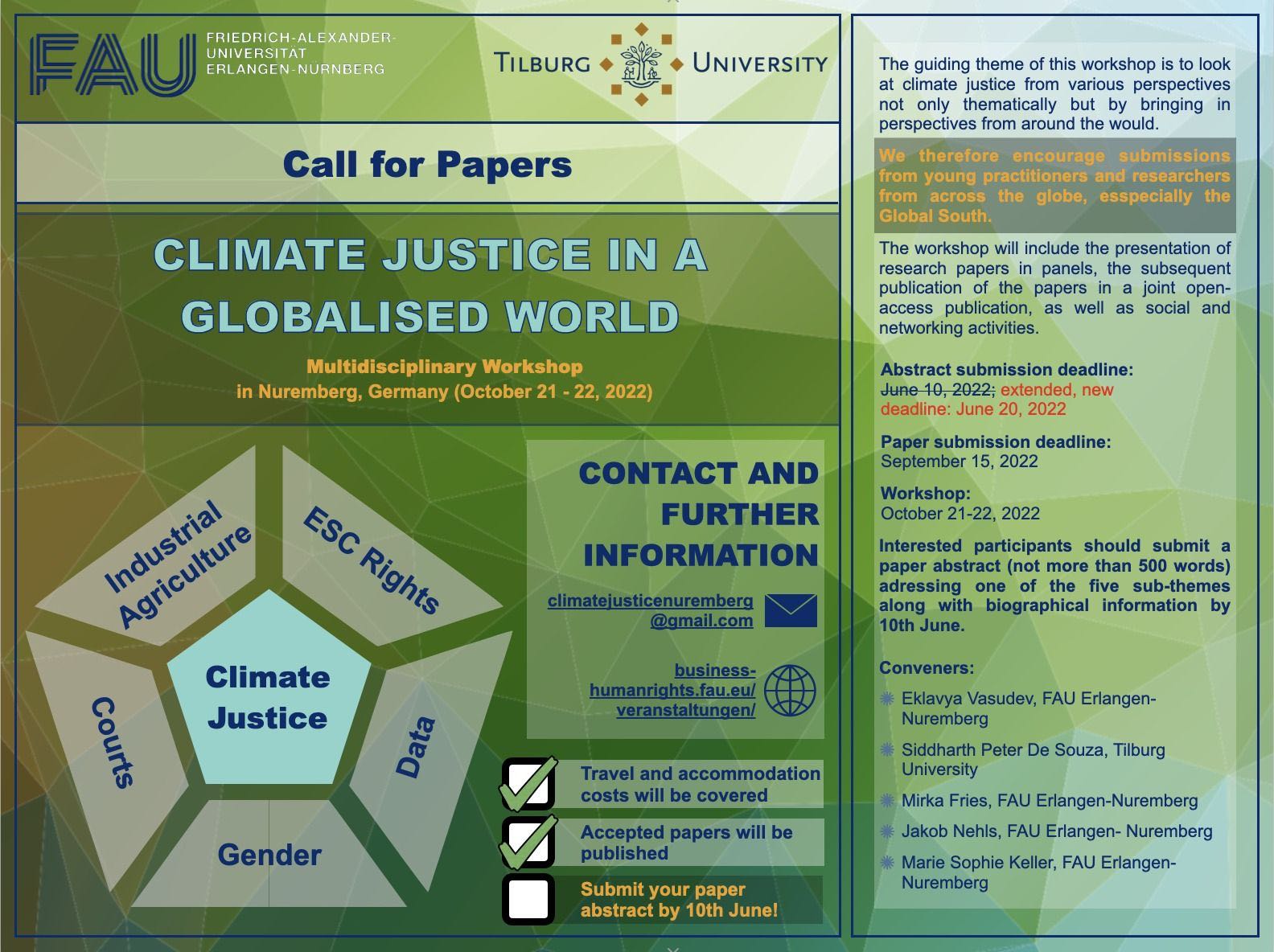 We warmly invite you to our upcoming lecture series: Business and Human Rights

The lecture series will be held Tuesdays from 6.30 – 8.00 p.m. in the B6 BISSANTZ Hörsaal Nuremberg.

PLEASE NOTE: The lecture on 1st January will be online via Zoom only!

Participation is open and free of charge, no prior registration is required. As of Nov 15 2021, access will only be granted to people who are vaccinated against or have recovered from COVID-19 (2G rule). Please have documentation ready.

The lecture will also take place via Zoom:

Recorded lectures can be found here.